The COVID-19 pandemic has made it harder for banks to trace the source of payment card data stolen from smaller, hacked online merchants. On the plus side, months of quarantine have massively decreased demand for account information that thieves buy and use to create physical counterfeit credit cards. But fraud experts say recent developments suggest both trends are about to change — and likely for the worse.

The economic laws of supply and demand hold just as true in the business world as they do in the cybercrime space. Global lockdowns from COVID-19 have resulted in far fewer fraudsters willing or able to visit retail stores to use their counterfeit cards, and the decreased demand has severely depressed prices in the underground for purloined card data.

An ad for a site selling stolen payment card data, circa March 2020.

Stas Alforov, Gemini’s director of research and development, said that since the beginning of 2020 the company has seen a steep drop in demand for compromised “card present” data — digits stolen from hacked brick-and-mortar merchants with the help of malicious software surreptitiously installed on point-of-sale (POS) devices.

Alforov said the median price for card-present data has dropped precipitously over the past few months.

“Gemini Advisory has seen over 50 percent decrease in demand for compromised card present data since the mandated COVID-19 quarantines in the United States as well as the majority of the world,” he told KrebsOnSecurity.

Meanwhile, the supply of card-present data has remained relatively steady. Gemini’s latest find — a 10-month-long card breach at dozens of Chicken Express locations throughout Texas and other southern states that the fast-food chain first publicly acknowledged today after being contacted by this author — saw an estimated 165,000 cards stolen from eatery locations recently go on sale at one of the dark web’s largest cybercrime bazaars.

“Card present data supply hasn’t wavered much during the COVID-19 period,” Alforov said. “This is likely due to the fact that most of the sold data is still coming from breaches that occurred in 2019 and early 2020.” 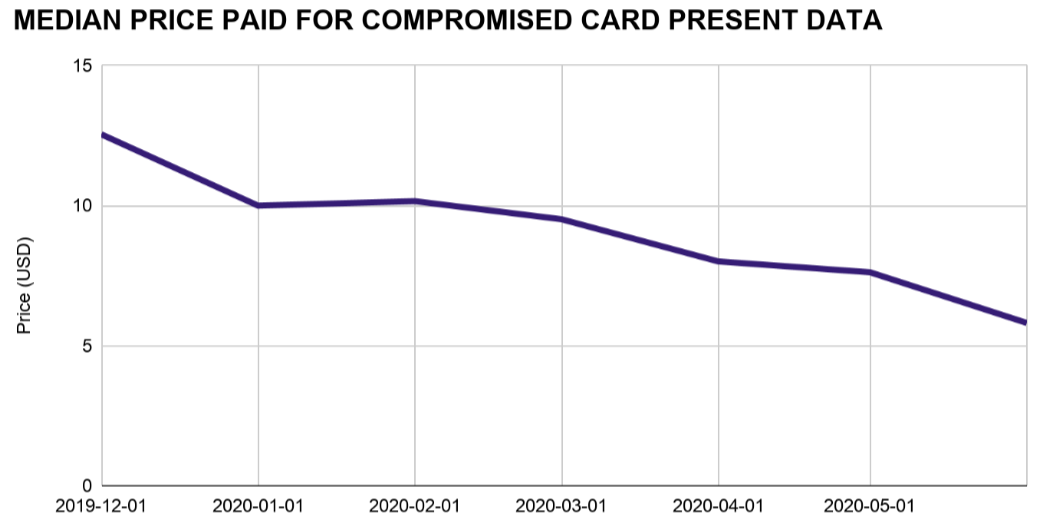 A lack of demand for and steady supply of stolen card-present data in the underground has severely depressed prices since the beginning of the COVID-19 pandemic. Image: Gemini Advisory

Naturally, crooks who ply their trade in credit card thievery also have been working from home more throughout the COVID-19 pandemic. That means demand for stolen “card-not-present” data — customer payment information extracted from hacked online merchants and typically used to defraud other e-commerce vendors — remains high. And so have prices for card-not-present data: Gemini found prices for this commodity actually increased slightly over the past few months.

Andrew Barratt is an investigator with Coalfire, the cyber forensics firm hired by Chicken Express to remediate the breach and help the company improve security going forward. Barratt said there’s another curious COVID-19 dynamic going on with e-commerce fraud recently that is making it more difficult for banks and card issuers to trace patterns in stolen card-not-present data back to hacked web merchants — particularly smaller e-commerce shops.

“One of the concerns that has been expressed to me is that we’re getting [fewer] overlapping hotspots,” Barratt said. “For a lot of the smaller, more frequently compromised merchants there has been a large drop off in transactions. Whilst big e-commerce has generally done okay during the COVID-19 pandemic, a number of more modest sized or specialty online retailers have not had the same access to their supply chain and so have had to close or drastically reduce the lines they’re selling.”

Banks routinely take groups of customer cards that have experienced fraudulent activity and try to see if some or all of them were used at the same merchant during a similar timeframe, a basic anti-fraud process known as “common point of purchase” or CPP analysis. But ironically, this analysis can become more challenging when there are fewer overall transactions going through a compromised merchant’s site, Barratt said.

“With a smaller transactional footprint means less Common Point of Purchase alerts and less data to work on to trigger a forensic investigation or fraud alert,” Barratt said. “It does also mean less fraud right now – which is a positive. But one of the big concerns that has been raised to us as investigators — literally asking if we have capacity for what’s coming — has been that merchants are getting compromised by ‘lie in wait’ type intruders.”

Barratt says there’s a suspicion that hackers may have established beachheads [breachheads?] in a number of these smaller online merchants and are simply biding their time. If and when transaction volumes for these merchants do pick up, the concern is then hackers may be in a better position to mix the sale of cards stolen from many hacked merchants and further confound CPP analysis efforts.

“These intruders may have a beachhead in a number of small and/or middle market e-commerce entities and they’re just waiting for the transaction volumes to go back up again and they’ve suddenly got the capability to have skimmers capturing lots of card data in the event of a sudden uptick in consumer spending,” he said. “They’d also have a diverse portfolio of compromise so could possibly even evade common point of purchase detection for a while too. Couple all of that with major shopping cart platforms going out of support (like Magento 1 this month) and furloughed IT and security staff, and there’s a potentially large COVID-19 breach bubble waiting to pop.”

With a majority of payment cards issued in the United States now equipped with a chip that makes the cards difficult and expensive for thieves to clone, cybercriminals have continued to focus on hacking smaller merchants that have not yet installed chip card readers and are still swiping the cards’ magnetic stripe at the register.

Barratt said his company has tied the source of the breach to malware known as “PwnPOS,” an ancient strain of point-of-sale malware that first surfaced more than seven years ago, if not earlier.

Chicken Express CEO Ricky Stuart told KrebsOnSecurity that apart from “a handful” of locations his family owns directly, most of his 250 stores are franchisees that decide on their own how to secure their payment operations. Nevertheless, the company is now forced to examine each store’s POS systems to remediate the breach.

Stuart blamed the major point-of-sale vendors for taking their time in supporting and validating chip-capable payment systems. But when asked how many of the company’s 250 stores had chip-capable readers installed, Stuart said he didn’t know. Ditto for the handful of stores he owns directly.

“I don’t know how many,” he said. “I would think it would be a majority. If not, I know they’re coming.”