Google Cloud today announced a new solution for its telecom customers: Anthos for Telecom. You can think of this as a specialized edition of Google’s container-based Anthos multi-cloud platform for both modernizing existing applications and building new ones on top of Kubernetes. The announcement, which was originally slated for MWC, doesn’t come as a major surprise, given Google Cloud’s focus on offering very targeted services to its enterprise customers in a number of different verticals.

Given the rise of edge computing and, in the telco business, 5G, Anthos for Telecom makes for an interesting play in what could potentially be a very lucrative market for Google. This is also the market where the open-source OpenStack project has remained the strongest.

What’s maybe even more important here is that Google is also launching a new service called the Global Mobile Edge Cloud (GMEC). With this, telco companies will be able to run their applications not just in Google’s 20+ data center regions, but also in Google’s more than 130 edge locations around the world.

“We’re basically giving you compute power on our edge, where previously it was only for Google use, through the Anthos platform,” explained Eyal Manor, the VP of Engineering for Anthos. “The edge is very powerful and I think we will now see substantially more innovation happening for applications that are latency-sensitive. We’ve been investing in edge compute and edge networking for a long time in Google over the years for the internal services. And we think it’s a fairly unique capability now to open it up for third-party customers.”

For now, Google is only making this available to its teleco partners, with AT&T being the launch customers, but over time, Manor said, it’ll likely open its edge cloud to other verticals, as well. Google also expects to be able to announce other partners in the near future.

As for Anthos for Telecom, Manor notes that this is very much what its customers are asking for, especially now that so many of their new applications are containerized.

“[Anthos] brings the best of cloud-as-a-service to our customers, wherever they are, in multiple environments and provide the lock-in free environment with the latest cloud tools,” explained Manor. “The goal is really to empower developers and operators to move faster in a consistent way, so regardless of where you are, you don’t have to train your technical staff. It works on-premise, it works on GCP and on other clouds. And that’s what we hear from customers — customers really like choice.”

In the telecom industry, those customers also want to get higher up the stack and get consistency between their data centers and the edge — and all of that, of course, is meant to bring down the cost of running these networks and services.

“We don’t want to manage the [technology] we previously invested in for many years because the upgrades were terribly expensive and slow for that. I hear that consistently. And please Google, make this seem like a service in the cloud for us,” Manor said.

For developers, Anthos also promises to provide the same development experience, no matter where the application is deployed — and Google now has an established network of partners that provides both solutions to developers as well as operators around Anthos. To this effect, Google is also launching new partnerships with the Amdocs customer experience platform and Netcracker today.

“We’re excited to unveil a new strategy today to help telecommunications companies innovate and accelerate their digital transformation through Google Cloud,” said Thomas Kurian, CEO of Google Cloud, in today’s announcement. “By collaborating closely with leading telecoms, partners and customers, we can transform the industry together and create better overall experiences for our users globally.” 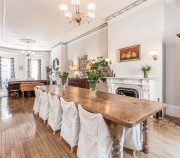 Foursquare buys Placed from Snap Inc. on the heels of $150M in new funding

Forescout to be acquired by a pair of private equity firms for $1.9B

YC-backed Turing uses AI to help speed up the formulation of new consumer packaged... Zendesk’s latest tools designed to give fuller view of the customer
Scroll to top