This year’s Bessemer Venture Partners’ annual Cloud 100 Benchmark report was published recently and my colleague Alex Wilhelm looked at some broad trends in the report, but digging into the data, I decided to concentrate on the Top 10 companies by valuation. I found that the top company has defied convention for a couple of reasons.

Bessemer looks at private companies. Once they go public, they lose interest, and that’s why certain startups go in and out of this list each year. As an example, Dropbox was the most highly valued company by far with a valuation in the $10 billion range for 2016 and 2017, the earliest data in the report. It went public in 2018 and therefore disappeared.

While that $10 billion benchmark remains a fairly good measure of a solidly valued cloud company, one company in particular blew away the field in terms of valuation, an outlier so huge, its value dwarfs even the mighty Snowflake, which was valued at over $12 billion before it went public earlier this month.

That company is Stripe, which has an other-worldly valuation of $36 billion. Stripe began its ascent to the top of the charts in 2016 and 2017 when it sat behind Dropbox with a $6 billion valuation in 2016 and around $8 billion in 2017. By the time Dropbox left the chart in 2018, Stripe would have likely blown past it when its valuation soared to $20 billion. It zipped up to around $23 billion last year before taking another enormous leap to $36 billion this year.

Stripe remains an outlier not only for its enormous valuation, but also the fact that it hasn’t gone public yet. As TechCrunch’s Ingrid Lunden pointed out in an article earlier this year, the company has remained quiet about its intentions, although there has been some speculation lately that an IPO could be coming.

What Stripe has done to earn that crazy valuation is to be the cloud payment API of choice for some of the largest companies on the internet. Consider that Stripe’s customers include Amazon, Salesforce, Google and Shopify and it’s not hard to see why this company is valued as highly as it is.

Stripe came up with the idea of making it simple to incorporate a payments mechanism into your app or website, something that’s extremely time-consuming to do. Instead of building their own, developers tapped into Stripe’s ready-made variety and Stripe gets a little money every time someone bangs on the payment gateway.

When you’re talking about some of the biggest companies in the world being involved, and many others large and small, all of those payments running through Stripe’s systems add up to a hefty amount of revenue, and that revenue has led to this amazing valuation.

One other company you might want to pay attention to here is UIPath, the robotic process automation company, which was sitting just behind Snowflake with a valuation of over $10 billion. While it’s unclear if RPA, the technology that helps automate legacy workflows, will have the lasting power of a payments API, it certainly has come on strong the last couple of years.

Most of the companies in this report appear for a couple of years as they become unicorns, watch their values soar and eventually go public. Stripe up to this point has chosen not to do that, making it a highly unusual company.

Which 5 cloud startup categories are the hottest? 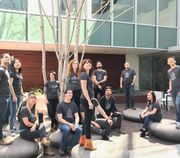 Background checks pay for Checkr, which just rang up $100 million in new funding

Airbnb is running its own internal university to teach data science

Microsoft Teams has been down this morning

Who is Tech Investor John Bernard? EasySend raises $16M from Intel, more for its no-code approach to automating...
Scroll to top